HOW NOT TO GET RID OF SWINE FLU

Posted on September 22, 2009 by roadtogameday 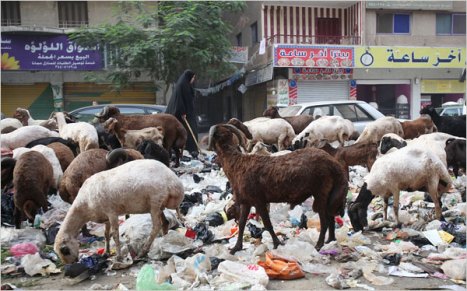 Goats just haven’t picked up the slack for the missing pigs.
(Probably because they’re looking over their shoulders)

You’ve got to hand it to the Egyptians. When I was worried about the swine flu pandemic, I wondered what our government would do to make sure all Americans were safe. The Egyptians, they weren’t going to take any chances. So they killed all the pigs in Egypt.

According to the New York Times:

But the crisis should not have come as a surprise.

When the government killed all the pigs in Egypt this spring — in what public health experts said was a misguided attempt to combat swine flu — it was warned the city would be overwhelmed with trash.

The pigs used to eat tons of organic waste. Now the pigs are gone and the rotting food piles up on the streets of middle-class neighborhoods like Heliopolis and in the poor streets of communities like Imbaba.

Ramadan Hediya, 35, who makes deliveries for a supermarket, lives in Madinat el Salam, a low-income community on the outskirts of Cairo.

“The whole area is trash,” Mr. Hediya said. “All the pathways are full of trash. When you open up your window to breathe, you find garbage heaps on the ground.”

What started out as an impulsive response to the swine flu threat has turned into a social, environmental and political problem for the Arab world’s most populous nation.

When the swine flu fear first emerged, long before even one case was reported in Egypt, President Hosni Mubarak ordered that all the pigs be killed in order to prevent the spread of the disease.

When health officials worldwide said that the virus was not being passed by pigs, the Egyptian government said that the cull was no longer about the flu, but was about cleaning up the zabaleen’s crowded, filthy, neighborhood.

I think we should put other world problems into the hands of the Egyptian government. I’d love to see their solution for things like public/private health care, the subprime mortgage crisis, global warming, world hunger, hurricane season.

It’d be like a big game of musical chairs or something.